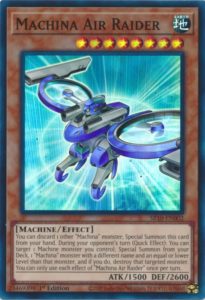 You can discard 1 other “Machina” monster; Special Summon this card from your hand. During your opponent’s turn (Quick Effect): You can target 1 Machine monster you control; Special Summon from your Deck, 1 “Machina” monster with a different name and an equal or lower Level than that monster, and if you do, destroy that targeted monster. You can only use each effect of “Machina Air Raider” once per turn.

Machina Air Raider special summons itself from your hand. The effect requires you to discard one Machina monster from your hand. It is a quick method to summon this monster. You have an effective card at level eight on the field.

Furthermore, the effect to special summon a monster is a great ability for a monster. Machina Air Raider does not rely on tributes. You only need to discard a single card instead of sending two monsters from the field to the graveyard for a tribute.

One of the best cards to discard for this effect is Machina Resavenger. This monster has an effect in the graveyard. You may add Machina Resavenger from your graveyard to your hand when your Machina destroys an opponent’s monster by battle. Therefore, you may regain this card after you discard it, and this effect minimizes the cost of Machina Air Raider’s effect.

Machina Air Raider targets one of your machine monsters and special summons a Machina with a level equal or less than the original monster from your deck. This effect is a useful ability when you need the right monster on the field for the current situation. It is a simple method to special summon a card and activate its effect when you special summon it.

Machina Air Raider has good synergy with some monsters, spells, and traps. You are able to create strong combos and fields with these combinations. Machina has a good number of spells for the archetype. These spells support the archetype or machines in general.

Play these spells and traps with Machina Air Raider

Machina Air Raider is a great card for XYZ summons of Rank 8 monsters because it is a level 8 monster. Its ability to special summon itself sets up the field. You only need one additional level eight monster for the XYZ summon.