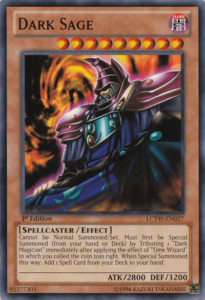 Cannot be Normal Summoned/Set. Must first be Special Summoned (from your hand or Deck) by Tributing 1 “Dark Magician” immediately after applying the effect of “Time Wizard” in which you called the coin toss right. When Special Summoned this way: Add 1 Spell Card from your Deck to your hand.

A spellcaster gains new power from wisdom. The Dark Magician gained wisdom from his experiences on the field. This new power transforms the ultimate wizard into the Dark Sage. He reaches a new level of power. The Dark Sage has an effective ability for adding a Spell card from your deck to your hand.

However, this effect from Time Wizard also tributed Yugi’s Dark Magician for Dark Sage! The duel ended with an epic climax. Yugi won  the duel with Dark Sage.

Dark Sage is a difficult monster to summon. He has many resources and requirements. Dark Sage requires Dark Magician, Time Wizard, and a successful attempt of Time Wizard’s effect to special summon him.

Dark Sage adds any Spell from the deck to your hand when you special summon him with the first effect. This effect gives access to a powerful Spell. You gain momentum and an advantage.

Furthermore, you can add cards such as Monster Reborn to your hand. Any Spell from the deck can offer an advantage. It fits the theme of the deck. Dark Magician has many useful Spells such as Bond Between Teacher and Student.

Play these cards with Dark Sage:

Overall, Dark Sage is one of the worst forms of the Dark Magician. His conditions for his summoning are nearly impossible to meet. Dark Sage will only be remembered as the card to defeat Joey in the Duelist Kingdom Championship.