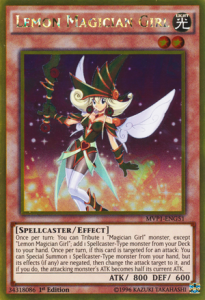 Once per turn: You can Tribute 1 “Magician Girl” monster, except “Lemon Magician Girl”; add 1 Spellcaster-Type monster from your Deck to your hand. Once per turn, if this card is targeted for an attack: You can Special Summon 1 Spellcaster-Type monster from your hand, but its effects (if any) are negated, then change the attack target to it, and if you do, the attacking monster’s ATK becomes half its current ATK.

Lemon Magician Girl is a member of the Magician Girl archetype. Yugi plays her in his current deck. I like her adorable artwork. It fits the archetype’s theme and style. She lacks a strong offense, but she makes up for it in her effects.

Lemon Magician Girl’s first effect is lackluster and you will rarely use it. The effect tributes one Magician Girl and adds a spellcaster from your deck to hand. You are trading a monster on the field for a monster in your deck. The effect helps you search for one of your deck’s best monsters. Then, you can summon it when you meet its requirements.

However, I do not like Lemon’s Magician’s first effect because it is counterproductive. I do not want to tribute a Magician Girl to search for a monster. It is misusing a resource to search for a new resource. I want to tribute my monsters for summoning my best monsters. Furthermore, you need the monster to summon the spellcaster that you searched for.

Search for these spellcasters from your deck!

Furthermore, you play the strategy of stalling for time. An experienced player is not going to attack Lemon Magician Girl. He or she will either destroy her by their card’s effect or banish her to avoid her second effect. You can stall the game to gather resources for a few turns. Then, you can counter your opponent’s board.