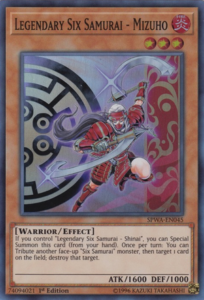 If you control “Legendary Six Samurai – Shinai”, you can Special Summon this card (from your hand). Once per turn: You can Tribute another face-up “Six Samurai” monster, then target 1 card on the field; destroy that target.

Legendary Six Samurai – Mizuho tributes one Six Samurai monster, and you may destroy one card on the field. The effect is an even trade to destroy one of your opponent’s cards. It is a useful effect if you need to remove a powerful monster or continuous trap from the field.