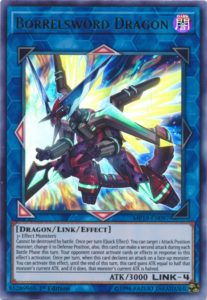 3+ Effect Monsters
Cannot be destroyed by battle. Once per turn (Quick Effect): You can target 1 Attack Position monster; change it to Defense Position, also, this card can make a second attack during each Battle Phase this turn. Your opponent cannot activate cards or effects in response to this effect’s activation. Once per turn, when this card declares an attack on a face-up monster: You can activate this effect; until the end of this turn, this card gains ATK equal to half that monster’s current ATK, and if it does, that monster’s current ATK is halved.

Varis (Ryoken Kogami) plays Borrelsword Dragon in his deck from Yu-Gi-Oh! VRAINS. Varis first plays this card in his duel against The Gore (George Gore) in episode 40. He uses the effect of Borrelsword Dragon to attack twice in a turn, and he wins the duel!

Borrelsword Dragon grants protection for itself, and it cannot be destroyed battle. An opponent can summon a monster with a higher ATK than this monster. However, the opponent is unable to destroy Borrelsword Dragon.

This effect provides decent protection. Yu-Gi-Oh! has many monster with more than 3,000 ATK. You can have a strong monster on the field with some protection.

The first effect of Borrelsword Dragon does not provide protection from all types of destruction. A cards such as Raigeki with effects to destroy cards can destroy this Link Monster. In addition, cards such as Black Luster Soldier – Envoy of The Beginning with the ability to banish cards can banish this monster. Opponents can overcome the first effect.

Furthermore, the player with Borrelsword Dragon will still take damage from battle. The monster’s effect does not prevent damage. An opponent’s monster with a stronger ATK cannot destroy Borrelsword Dragon, but it will deal damage.

Borrelsword Dragon is able to attack twice in a turn, and the monster changes an opponent’s monster from Attack Position to Defense Position. This effect is a strong offense. You can destroy two monsters in a single turn. The momentum swings in your favor with the advantage on offense.

Furthermore, Borrelsword Dragon is an effective card against swarm decks. This Link Monster can destroy two monsters in a single turn. The opponent loses two monsters. In addition, you inflict major damage from two battles against the opponent.

Play these cards with Borrelsword Dragon!

Furthermore, Tri-Gate Wizard doubles the damage to an opponent. Borrelsword Dragon co-linked with Tri-Gate Wizard can double damage from both of its attacks. Therefore. you can potentially deal more than 8,000 damage in a single turn.

Overall, Borrelsword Dragon is a strong Link Monster with impressive effects. it is an offensive card with the purpose to inflict a lot of damage. Borrelsword Dragon dominates opponents with two attacks. This monster is not an easy card to destroy, but its protection is not perfect.