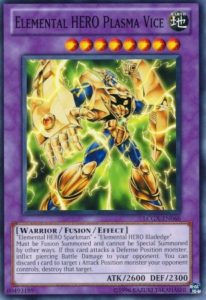 Furthermore, Elemental HERO Plasma Vice has a respectable offense of 2,600 ATK. He can destroy many monsters in battle. You can deal major damage if an opponent’s monster has a low defense.

Furthermore, you can use this effect multiple times during a turn, but multiple activations require a lot of resources. I do not recommend using this effect too often. You would lose a lot of cards.

The fusion of Elemental HERO Plasma Vice requires Elemental HERO Bladedge and Elemental HERO Sparkman. These cards are simple requirements for the summon. You can use Polymerization, Miracle Fusion, and Parallel World Fusion for the fusion summon under the proper conditions.