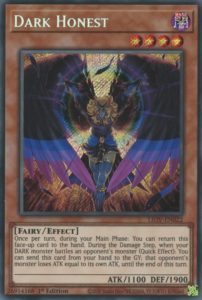 Once per turn, during your Main Phase: You can return this face-up card to the hand. During the Damage Step, when your DARK monster battles an opponent’s monster (Quick Effect): You can send this card from your hand to the GY; that opponent’s monster loses ATK equal to its own ATK, until the end of this turn.

Dark Honest returns to your hand from the field for once per turn. This effect is very useful if you special summon Dark Honest. You want this card in your hand for his second ability. He does not provide a lot of value on the field with the exception of summons.

A card such as Call of The Haunted may special summon Dark Honest from the graveyard. Then, you may use Dark Honest’s effect to return him to your hand. You have everything in place for its second ability.

Dark Honest decreases an opponent’s monster’s ATK to zero when it battles your dark monster. This effect ensures a successful battle for you and the destruction of the opponent’s monster. It swings the balance and momentum in his player’s favor.

In addition, Dark Honest is a hand trap like the original Honest. This effect has the element of surprise if you did not use the first effect. You can catch the opponent off guard and gain momentum in battle because your monster will be stronger than the opponent’s monster.

Furthermore, many archetypes with dark monsters can insert Dark Honest in their decks.  They have strong synergy with this monster in battle. Dark Honest allows powerful cards such as Dark Magician and Grapha, Dragon Lord of Dark World to defeat nearly any monster by battle. You also deal massive damage to the opponent.

Add Dark Honest to your hand!

Some cards can add Dark Honest to your hand. These cards set up the second effect because the card would be in the correct place. Therefore, these helpful spells, traps, and monsters add consistency to Dark Honest. You can discard it for its effect when the time arrives.

Play these cards with Dark Honest!

Overall, Dark Honest is a great card for decks with dark monsters. You instantly turn the tide of any battle in your favor. Decks can easily add this card to them. I recommend playing two to three copies of Dark Honest in your deck.