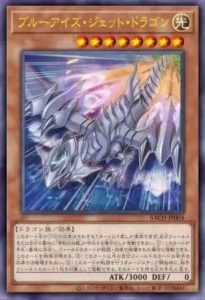 Other cards you control cannot be destroyed by your opponent’s card effects. You can only use each of the following effects of “Blue-Eyes Jet Dragon” once per turn, and can only activate them while “Blue-Eyes White Dragon” is on your field or in your GY. If a card(s) on the field is destroyed by battle or card effect: You can Special Summon this card from your GY (if it was there when the card was destroyed) or hand (even if not). At the start of the Damage Step, if this card battles: You can target 1 card your opponent controls; return it to the hand.

Blue-Eyes Jet Dragon is not a card in the original series. Seto Kaiba flies a jet with a similar design. It has a model with the design of a Blue-Eyes White Dragon.

Furthermore, the protection is not limited to Blue-Eyes. Blue-Eyes Jet Dragon provides protection to cards regardless of their archetype. This is a nice effect, and you can avoid many of your opponent’s effects.

However, Blue-Eyes Jet Dragon’s effect does not apply to itself, and an opponent can destroy it with an effect. This monster is unable to protect itself. This limitation balances the card for fairness.

Blue-Eyes Jet Dragon requires a Blue-Eyes White Dragon in your graveyard or on your field to activate its third and fourth effects. The setup for the card will require a few resources from the duel, and the conditions will be set after a few turns during a game. It is a secondary monster due to the time of this effect.

Furthermore, many cards in Yu-Gi-Oh! have effects to destroy other cards. You are very likely to activate Blue-Eyes Jet Dragon’s third effect. Your opponent can destroy one of your cards to trigger the conditions for the special summon.

The effect to special summon itself provides huge value to this monster. You do not need to tribute monsters or pay a cost for Blue-Eyes Jet Dragon. You are not losing any resources to play this monster, and you may continue to use your current resources on the field.

Furthermore, this effect is a great tactic against monsters from the extra deck. Blue-Eyes Jet Dragon return those monsters to the opponent’s extra deck because they cannot be in the hand. An opponent must spend many resources to return those cards to the field.

Konami loves creating new cards with good effects for Blue-Eyes. Blue-Eyes Jet Dragon has a large library of support. This effect monster is a perfect fit in the archetype and its current support.