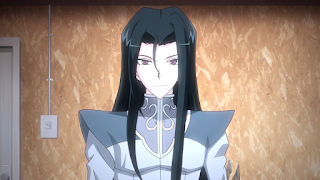 Ryuzu Myoujin is the main antagonist in Cardfight!! Vanguard G Stride Gate. He is the second character to play a Gear Chronicle deck. Ryuzu is the Company’s leader. His goal is to use the Time Zoadic Beasts to create the perfect future. Ryuzu’s perfect future does not have suffering. Conflicts would be resolved by vanguard. We learn he is the reason that Chrono’s father is currently not with Chrono.

We witness four phases of Ryuzu’s life. We saw as an elderly man before he dies. He is reborn as a young child. His flashbacks show his life as a young adult. He is reverted to a baby after Chrono defeats him in the finale. Ryuzu only speaks about creating the perfect future. This just becomes boring. We learn nothing about him besides his goal. I prefer Ryuzu as an adult. He has a better design for a villain. He has an eloquent and regal design.

We were never given a motive for Ryuzu Myoujin’s actions. Why did he want to create a perfect world? Why did he want to scarfice planet Cray for his desires? A few moments from his past are revealed to us. Those moments were only about him gathering stride force and learning how to use its power. We were never told why he wanted to achieve his goals. Only his experiences as a young adult were shown to us. There was not any information on his childhood.

The first series provided much better villains. Their actions had consequences that affected the entire series. Leon wanted to restore Soyru’s dominance. He made an alliance with the Void to restore the Aqua Force. The Royal Paladins, Shadow Paladins, and Kagero were sealed because of Leon’s decision. This allowed Link Joker to swiftly invade Cray with little residence Serra is my favorite villain in the entire franchise. His heel was one of the best moments in the anime. He wanted to use Link Joker and the Void to conquer Earth and Cray. He came extremely close to realizing his dream. Link Joker became a part of Cray because of his actions.

My favorite villain in the saga is Satoru Enishi. I felt emotionally connected to Satoru. He plays a Dark Irregular deck. It fits his personality and backstory. He had a cause to cheer for. He wanted to make a better world for his childhood friend. He and an unnamed female were in the hospital for a horrible illness. They quickly became close friends. Unfortunately, she did not survive and his world was forever changed. He lost a person with a special bond. We have all been in a sad position to watch a love one pass away. Their memories live with us forever.

Shouma Shinonome is my second favorite character in Cardfight!! Vanguard G. He enjoys messing with Shion Kiba. His insanity reached new heights in his latest battle against Shion. His insanity is pure entertainment. He has the attitude and appearance of a threatening antagonist unlike Ryuzu. I would like to see Shouma play against different heroes.

Ryuzu Myoujin is my least favorite character in the series. He fails to live up to previous villains such as Leon and Serra. I cannot connect to his character. His lack of a motive really hurts his development as a character. He failed to make major moments in the season. Almost none of his actions had any long lasting consequences for the protagonists. The only consequences to his actions is losing and reverting to a newborn baby. The next villain should be more entertaining than Ryuzu. He or she cannot be worse when the only place to go is up.