Wow! Bushiroad has some awesome new promo cards. They will soon be released in Japan! These cool promos will be released in Cardfight Volume 9! Hopefully we will see them in the states later this year!

Goshawk Liberator, Cadeau
Clan: Gold Paladin
[AUTO](VC) Limit Break 4 (This ability is active if you have four or more damage):When this unit attacks a vanguard, this unit gets [Power]+5000 until end of that battle.
[AUTO](VC):[Counter Blast (1) – Cards with “Liberator” in its card name] When this unit’s attack hits a vanguard, you may pay the cost. If you do, look at the top card of your deck, search for up to one «Gold Paladin» from among them, call it to call it to an open (RC), and put the rest on the bottom of your deck.


Dimensional Robo, Daibrave
Clan: Dimension Police
[ACT](Soul):[Put this card into your drop zone] Choose up to one of your «Dimension Police» vanguards, and that unit gets “[AUTO](VC):[Counter Blast (1)] When this unit’s attack hits a vanguard, you may pay the cost. If you do, draw a card” until end of turn. 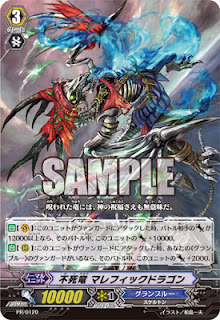 [Auto] (R): When this unit’s attacks a VG and you have a GrandBlue VG, this unit gets POWER+2000 during this battle