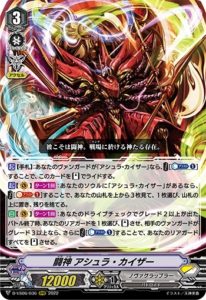 I am the War Deity. The godly being that shakes the ring.

[ACT](Hand):If your vanguard is “Asura Kaiser”, COST [Counter Blast (1)], and ride this card as [Stand].
[ACT](VC)1/Turn:If “Asura Kaiser” is in your soul, COST [Soul Blast (1)], look at three cards from the top of your deck, choose a card from among them, put it on the top of your deck, and discard the rest.
[AUTO](VC)1/Turn:At the end of the battle your drive check revealed a grade 2 or greater card, choose one of your rear-guards, [Stand] it, and if your opponent’s vanguard is grade 3 or greater, COST [Counter Blast (1)], and [Stand] all of your rear-guards.

Furthermore, this ability is an act, and it is a nice advantage for a strong combo. This means you may ride Asura Kaiser during your ride phase and superior ride War Deity, Asura Kaiser in the same turn. Therefore, you gain two accel circles for additional rear-guards in the front row.

War Deity, Asura Kaiser manipulates the top card of your deck. You are able to look at the top three cards of the deck. You place one card on the top and the other cards will go the drop zone. You have two options for your strategy.

Second, you have the option to place a trigger on top of the deck. A front trigger is a great choice for this unit. It adds 10,000 power to the front row. This is a great backup plan if the top three cards of your deck are not grade 2 or greater units.

The third ability decorates the offensive capabilities of Nova Grappler. War Deity, Asura Kaiser stands all of your rear-guards when his drive checks reveals a grade 2 or greater card. This offensive fury puts a lot of pressure on the your opponent.

Therefore, you will have at least nine attacks if you also activate the first ability. Your field would have eight rear-guard circles. Each rear-guard in the front row attacks twice in a turn.

Despite the multiple attacks, a defensive trigger shuts down the offense from War Deity, Asura Kaiser. Your opponent’s vanguard would be able to withstand some or all of your attacks. You pay a heavy cost for a burst of offense for only a defensive trigger to naturalize your defense.

Nova Grappler has a lot of generic support. You can create a deck with a variety of units for War Deity, Asura Kaiser. The best units with this card are rear-guards with abilities to gain power or abilities to stand rear-guards for additional attacks.

Kick Kick Typhoon is a complementary piece for War Deity, Asura Kaiser. This grade 2 unit fits the strategy for Nova Grappler. Kick Kick Typhoon stands a rear-guard for an additional attack, and you may activate this ability once per turn.

War Deity, Asura Kaiser (V Series) is a decent card for the Premium Format in a deck for Asura Kaiser. It generates a lot of offense in the early game. It has a lot of value in its ability to superior ride itself. You get two accel markers in a single turn.