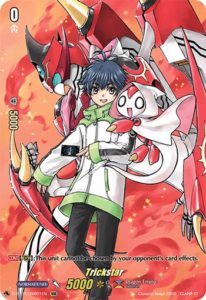 [CONT](RC):This unit cannot be chosen by your opponent’s card effects.

Trickstar is a grade zero unit from Cardfight!! Vanguard overDress. He is a key card for the game’s mechanic of overDress. He appears to be a weak card with 5,000 power, but he has many forms with powerful effects.

Trickstar is Yu-yu Kondo’s avatar and the main unit of the deck. He debuts in episode two of Cardfight!! Vanguard overDress. Yu-yu plays Tricksstar during a game. Yu-yu Kondo places Varina on top of him to activate overDress, and Yu-yu wins the game!

Trickstar is the key unit for the mechanics of overDress. This unit is the originaldress for many cards with the mechanic. You will place one of these units on top of him, and they gain special effect from overDress.

Trickstar cannot be chosen by the opponent’s effects. This effect is critical to Trickstar’s success. You need to maintain this unit on the field. Trickstar is the originaldress for units with the ability of overDress.

Furthermore, you can call Trickstar to the back row before you activate overDress. An opponent could potentially attack him if you place him in the front row. Most cards are unable to attack him in this case.

Play these cards with Trickstar in the D-Standard Format!

Trickstar is the unit for many units’ condition for overDress. You must play Trickstar to meet these conditions. You stack these units on top of Trickstar.

Furthermore, these units are Trickstar’s overDress forms. They have powerful effects when they are in the state of overDress. Varina retires an opponent’s rear-guard. Vairina Valiente is able to attack twice in a single turn.

Trickstar is a unit from the Dragon Empire. Therefore, you can play this card in Kagero, Murakumo, Narukami, and Tachikaze in the premium format. You will also need to play the units with overDress to maximize this card’s full potential.

In addition, Trickstar best fits in a deck with Kagero, Narukami, and the Dragon Empire cards from the D-Standard Format. Vairina fits in those deck’s themes. Vairina retires an opponent’s rear-guard when it is in the state of overDress.

Trickstar can avoid effects of lock and dominate. An opponent cannot easily remove him from the field. He provides an effective strategy against certain decks such as Star-vaders.

Play these cards with Trickstar in the Premium Format!

Overall, Trickstar is an effective unit for overDress in both formats. An opponents cannot easily remove this card from the film. Trickstar is also the centerpiece for his forms in overDress. I recommend playing two to three copies of Trickstar in a deck with overDress.