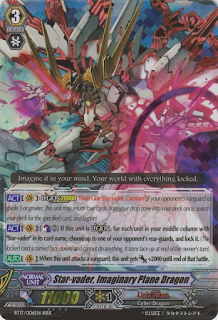 Imagine it in your mind. Your world with everything locked.

[ACT](VC):Legion20000 “Flash Gun Star-vader, Osmium” (If your opponent’s vanguard is grade 3 or greater, this unit may return four cards from your drop zone into your deck once, search your deck for the specified card, and Legion)
[ACT](VC):[Counter Blast (2)] If this unit is Legion, for each unit in your middle column with “Star-vader” in its card name, choose up to one of your opponent’s rear-guards, and lock it. (The locked card is turned face down, and cannot do anything. It turns face up at the end of the owner’s turn)
[AUTO](VC):When this unit attacks a vanguard, this unit gets [Power]+2000 until end of that battle.

Star-vader, Imaginary Plane Dragon’s first skill locks one of your opponent’s rear-guards for each unit in your middle column. Many Legions have skills that focus on the number of units in the middle column. You want three units in this column. This includes the Legion Leader, Legion Mate, and rear-guard in the back row. A total of three units on your opponent’s field will be locked. The triangle lock only allows your opponent’s vanguard to attack. The two rear-guards in the front row are locked and the vanguard’s booster is also locked to prevent the vanguard from gaining power.

Finally, I must mention the second skill. Star-vader, Imaginary Plane Dragon gains 2,000 power when he attacks a vanguard. This is a standard skill for many units with Legion and Limit Break. His Legion attack will be 22,000 power before a boost from the rear-guard and effects from Triggers. Star-vader, Crumble Mare is a good booster for a Legion vanguard. His gives a 10,000 boost of power when your vanguard is in Legion. Star-vader, Imaginary Plane Dragon’s Legion attack will have 32,000 power after all effects and boost from Star-vader, Crumble Mare.

Overall, Star-vader, Imaginary Plane Dragon is an efficient unit with a solid Legion skill. The triangle lock is still one of the strongest plays in Cardfight!! Vanguard. Lock is one of the few defensive keywords in the game. Most decks struggle to counter the limitations from Lock. It shuts down decks with multiple attacks such as Aqua Force and Nova Grappler. Lock your opponent in despair and defeat with Star-vader, Imaginary Plane Dragon!