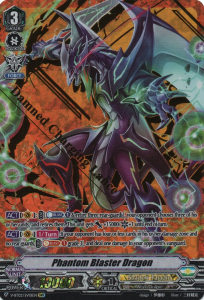 Phantom Blaster Dragon is the leader of the Shadow Paladins. His character has made his marks through Cardfight!! Vanguard’s long history. He was originally Thing Saver Dragon, but was corrupted by an evil force. His evil version has returned in Cardfight!! Vanguard V. He is carrying his deadly Damned Charging Lance.

Phantom Blaster Dragon is a strong vanguard and heart in the premium format. I recommend playing it in Blaster decks. He is not restricted to Generation Break or Limit Break from past eras, and you can use its first skill before your opponent reaches grade 3. He delivers a lot of pressure in the early game. Then, you can proceed to striding G-units on your following turn.

Play these cards in the Premium Format!