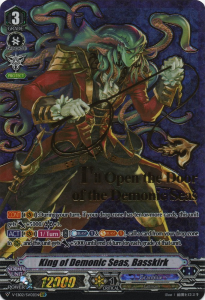 I’ll Open the Door of the Demonic Seas

King of Demonic Seas, Basskirk first skill grants him 5,000 power and plus one critical. This skill provides a lot of pressure. He can hit any vanguard without a boost, and will deal two damage! The skill requires your drop zone to have ten cards. This requirement is easy to fulfill with Granblue’s rear-guards milling the top cards of the deck to the drop zone.

Play these cards with King of Demonic Seas, Basskirk

Furthermore, King of Demonic Seas, Basskirk’s second skill superior calls a card from your drop zone to a rear-guard circle, and Basskirk gains 5,000 power for each grade of that unit. This skill complements the first skill. Basskirk further raises his power to new heights. The additional power adds more pressure to his attack. In addition to raising Basskirk’s power, you also gain a new unit.

Finally, your drop zone acts as a second hand. You will have many options for a rear-guard to superior call from the drop zone. I recommend superior calling Dragon Undead, Skull Dragon to maximize King of Demonic Seas, Bassskirk’s power. In addition to being called, Dragon Undead, Skull Dragon uses its ability to gain additional power. You will have two powerful units ready to win the game.

Combo: Return from The Drop Zone

The drop zone has eleven cards for this example.

Overall, King of Demonic Seas, Basskirk is a fantastic card for Granblue. His strong abilities command a complete set in a deck. He has a lot of synergy with the new cards. His second ability shines as it is able to build a solid offense. The undead pirates will never stop fighting with Basskirk as their vanguard.