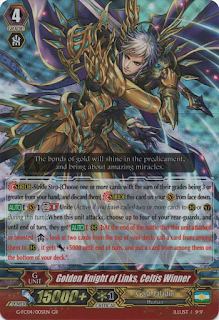 The bonds of gold will shine in the predicament, and bring about amazing miracles.

[Stride] (Released when both players’ vanguards are grade 3 or greater!)-Stride Step-[Choose one or more cards with the sum of their grades being 3 or greater from your hand, and discard them] Stride this card on your (VC) from face down.
[AUTO](VC) Generation Break 8 Unite (Active if you have called two or more units to (RC) or (GC) during this turn):When this unit attacks, choose up to four of your rear-guards, and until end of turn, they get “[AUTO](RC):At the end of the battle that this unit attacked or boosted, look at two cards from the top of your deck, call a card from among them to (RC), it gets [Power]+5000 until end of turn, and put a card from among them on the bottom of your deck.”.

The Gold Paladins reached new heights through the power of unite! Golden Knight of Links, Celtis Winner extends his clan’s power with Generation Break 8. Every clan has a special G-Unit with the power of a miracle. He designed just like every unit with this power. His purpose is win games on the same turn he strides on the field. Golden Knight of Links, Celtis Winner units his comrades and gives them the burning desire for victory!

Golden Knight of Links, Celtis Winner’s Generation Break 8 gives an additional skill to all of your rear-guards. You may superior call a card from the top two cards of your deck after an unit attacks a vanguard or boosts a rear-guard., and each new unit gains 5,00 power. Golden Knight of Links, Celtis Winner needs to attack first for all rear-guards to benefit from the skill. The first wave of rear-guards may benefit from triggers if you are able to check triggers during the drive check. You will have a minimum of five attacks if you have a full field.

Furthermore, units with abilities to gain power in combat are perfect in this setting. They can provide a huge push for a hard-earned victory. The extra attacks will make guarding more difficult for your opponent. Knight of Autumn Light, Regan is one of my favorite units to play in my deck. She gains 3,000 power from unite and she can avoid your opponent’s effects/ She should be swinging her attack with over 20,000 power if a good booster. Superior call her to the field if she is an option.

However, there are a few problems with this card. Stand Triggers are not effective with him. He needs to be the first attacker and all rear-guards will be standing at this time in combat. Stand Triggers will not have targets to stand, and will only give power to rear-guards. Players are not getting the full benefits from Stand Triggers to have multiple attacks because of the trigger.

Overall, Golden Knight of Links, Celtis Winter is a strong card, and is the perfect G-Unit in the right situation in a game. I will play one copy of in my deck. He adds more attacks in a single turn. Players can push their opponent into a corn. A wave of fight attacks can win a game if you can correctly time the attack. Unleash the ultimate unite with Golden Knight of Links, Celtis Winner