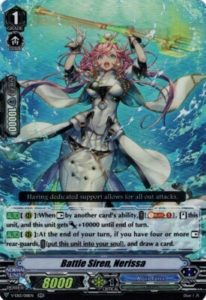 Having dedicated support allows for all out attacks.

In addition, Battle Siren Nerissa has a total of 28,000 power when she is on an Accel circle. She has a decent amount of pressure, and can easily hit every vanguard. Your opponent must guard with two cards to block her attack.

Battle Siren, Nerissa goes to the soul and you draw a card if you have four or more rear-guards as rest. This ability is a useful method to maintain resources against certain types of decks. She is a great rear-guard for her first ability and you would only use this ability against some opponents.

Play these cards with Battle Siren, Nerissa in the standard format!

Finally, Aqua Force in the premium format may play Battle Siren, Nerissa for her second ability. She is a generic card for any deck in Aqua Force. A player is able to maintain resources and quickly get his or her best cards.

Play these cards with Battle Siren, Nerissa in the premium format!