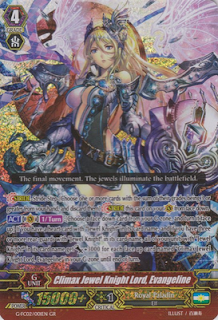 The final movement. The jewels illuminate the battlefield.

Furthermore, you can easily create rear-guard columns with more than 30,000 power. If you are able to use her skill three times in a game, then each unit will gain 9,000 power until the end of your turn. Fellowship Jewel Knight, Tracie is a 12K attacker when you have three or more Jewel Knight rear-guards on the field. Evangeline’s skill can boost Tracie to 15K for the first stride by flipping a copy of her face up in the G zone and 18K for the second stride as you already have two copies of Evangeline face up in your G zone.

Finally, Broken Heart Jewel Knight, Ashlei “Яeverse” is the perfect grade 3 unit for Evangeline’s deck. Ashlei retires opposing units and superior calls a Jewel Knight from your deck. She gathers resources for you and destroys your opponent’s resources. Banding Jewel Knight, Miranda is a fantastic card to play in Ashlei’s deck. She gains 2,000 power for having Ashlei as your vanguard and can give 3,000 power to a rear-guard if her attack hits an opposing vanguard. These skills open the door for Evangeline’s skill in the late game to defeat your opponent in an unstoppable Final Turn!

Overall, Climax Jewel Knight Lord, Evangeline represents the Jewel Knights’ greatest strength. They gain power by being a collective force. Evangeline’s skill gives a large power boost to every unit on the field. Your opponent will find it difficult to block your strong attacks. Bushiroad slowly continues to give more new cares for Jewel Knights. The archetype has received a little support in Cardfight!! Vanguard G era and hopefully the trend will continue. Climax Jewel Knight Lord, Evangeline will blow your opponent way in a climactic fashion!