Turles makes his return in DBZ CCG in The Movie Collection! He is the seventh Saiyan main personality and is the fifth strongest on the power level scale. Saiyans are loaded with many options. There are three heroes and four villains under the archetype. Which side will you choose? I’m still building Future Trunks at the moment. 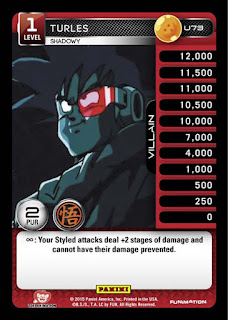 Turles Shadowy
Power: Your Styled attacks deal +2 stages of damage and cannot have their damage prevented. 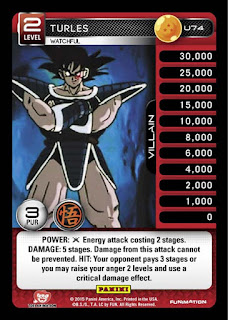 Turles Watchful
Power: Energy attack costing 2 stages. Damage: 5 stages. Damage from this attack cannot be prevented. HIT: Your opponent pays 3 stages or you may raise your anger 2 levels and use a critical damage effect. 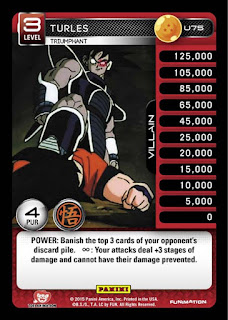 Turles Triumphant
Power: Power: Banish the top 3 cards of your opponent’s discard pile. Your attacks deal +3 stages of damage and cannot have their damage prevented. 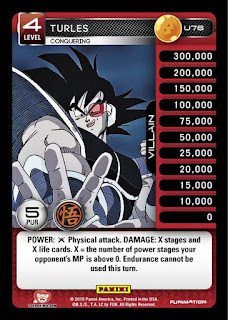 Turles is one of the most interesting main personalities. He shut downs Endurance. You either stop his attacks or take full damage without any mercy. His strategy is to quickly overwhelm an opponent and empty the Life Deck. His level one and level three cards increase the amount of damage from attacks. Levels two and four are attacks. If your opponent’s MP’s power stage is very high, then he or she is going to take a lot of damage from Turles Conquering. He is a good main personality to play besides Captain Ginyu and Piccolo.