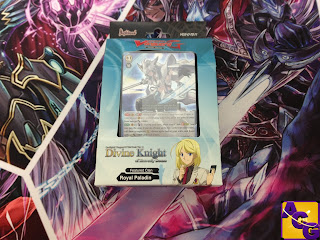 Divine Knight of Lore, Selfes is the deck’s G-Unit. He is one of the most valuable G-Units from a trial deck. His skill binds your hand to enable Brave and the bound cards return to your hand at the end of your turn. Bind your entire hand to maintain Brave after the Triple Drive! Brave will always be available during the battle phase. Every Brave deck needs to play at least two copies of him to consistently active your skills with Brave!

The majority of cards support the Brave ability. I am only going to focus on the deck’s most important units with Brave. The most import rear-guard in the trial deck is Knight of Discipline, Alectos.  His ability enables Brave regardless of the amount of cards in your hand. He will retain his place in Brave for years to come. The grade 2 RRR is Flying Swallow Knight, Claus. Flying Swallow Knight, Claus with an 11K attacker with Altmile and can return to your hand. You can recover a small portion of your hand’s size. Brave needs all the defense that it can get.

Divine Knight of Heavenly Decree has many cards that enhance Brave as a mechanic. Divine Knight of Lore, Selfes and Knight of Discipline, Alectos are the most valuable units in the deck. They assist the activation of Brave. However, a gimmick is very bad when it strongly relies on a few cards to enable it instead of activating under normal conditions. This trial deck’s best second benefit is the reprint of Blue Sky Knight, Altmile. Buy a start deck of  Divine Knight of Heavenly Decree if you are looking for reprints of Blue Sky Altmile for a generic Royal Paladin deck or just want to play Brave.
Trial Deck Rating: