This week’s action at locals couldn’t have been better because I pulled an awesome Blaster Dark! Sure he isn’t the best card in the world, but he is still an awesome card to pull! More surprisingly I actually played Yu-Gi-Oh!. Yu-Gi-Oh! players rarely come to my locals. 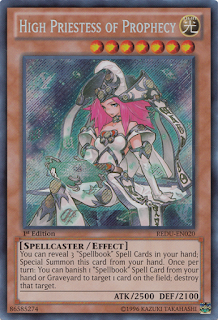 Surprisingly one of the guys at my locals  noticed that I have Yu-Gi-Oh! cards and asked for an awesome duel! I lose the match 2 games to 1! However, the first lose was completely my fault. The guy I was playing against used Imperial Order, and I didn’t realized that the card is banned. My deck was completely shut down in the first game by not realizing that simple fact. I had a Temperance of Prophecy and a Spellbooks of Secrets in my opening hand to quickly summon the High Priestess of Prophecy with. There is not much to say about the second game. I took full advantage of Black Luster Solider: Envoy of The Beginning’s effect. He was the key to my victory! I lose the third game because I only drew spell cards.

Matriarchy Spellcaster Beat Down Deck List! The Matriarchy Spellcaster deck focuses on using female spellcasters. It’s a fun female themed deck with a few male cards. The deck isn’t completed.  I need one more High Priestess of Prophecy to add to the deck, and I will remove one of my Dark Magicians. I will go into further details about the deck once it is completed.

Next up my Nova Grapplers went back into action! This time I battled a Dragonic Overlord The End player!   I won the match 2 games to 1! My Nova Grapplers deck isn’t up to standard. However, I did buy a few singles to help with some deck problems. I added another Brutal Jack and Mr. Invincible. Despite not being up to standard the deck has won many games. Having six stand triggers is working very well. I think I will replace the two draw triggers with two more stand triggers or two more critical triggers. I’m not getting the draw triggers during my drive trigger checks. The benefit would be that both triggers would give me more shield power than the draw triggers. Stand and critical triggers would put more pressure on my opponent to use more cards to guard with. 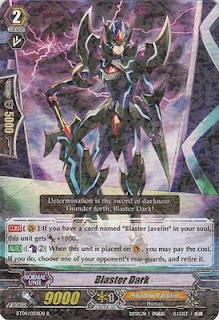 After a short break my Royal Paladins entered the battlefield! I added my new Blaster Dark just for fun! All
I need now is a Majesty Lord Blaster! The deck has been very constant so far. I easily won this match 3 games to none! This was a good opportunity to test out new tactics. I was riding on King of Knights, Alfred to lead me to victory! In the second game I used his skill to superior call Wingal from the deck to boost my rear guard Blaster Blade. This gave Blaster Blade a constant 19,000 attack to force my opponent to use more cards to guard with or to take the damage. Although I was never able to use Wingal Brave’s skill. My opponent always successfully guard against the Blaster Blade boosted by Wingal Brave.