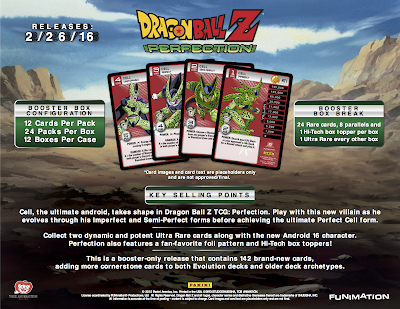 Panini America just officially announced the next booster set for Dragon Ball Z Trading Card Game. This booster set’s name is Perfection. We are at the Cell Games. The Z Fighters must defeat the wicked Cell or he will destroy the world! The perfect warrior,  Cell makes his debut in Dragon Ball Z Trading Card Game by Panini America. He evolves to his next form when he advances a level! Reach level 4 to feel the power of Super Perfect Cell! Android 16 also joins the battle!

No heroes were announced for today. I am predicting Super Saiyan 2 Gohan will be the top hero in this set. Gohan is the main protagonist in the Cell Games. It would make sense for him to get a new set of Main Personality cards.  He did not receive an upgrade in Dragon Ball Z Evolution. Gohan is primed to make a huge leap in this set.