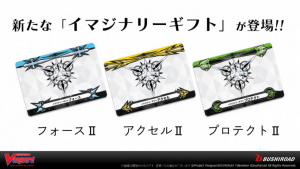 New Gifts have been introduced to Cardfight!! Vanguard. These new gifts are new versions of Accel, Force, and Protect. We can expand our strategies with the new Imaginary Gifts. These markers are horizontal to differentiate them from the first set of markers. They will be introduced in V Extra Booster 07: The Heroic Evolution.

You may only play one version of a gift in a game. For example, you may play Force II when you ride your first grade 3 vanguard. Then, you can only play Force II markers for the reminder of the game. Choose your gift wisely for each game. Some gifts will be better than others against certain decks.

You gain a permanent rear-guard circle on your front row and draw a card. Your rear-guard on this circle gains 5,000 power during your turn.

I really like the new version for Accel clans. It resolves their problem of lacking cards. Many clans such as Aqua Force and Nova Grappler struggle to maintain resources, and they finally have a solution to their troubles. The extra draw adds defense in your hand. I am looking forward to testing this marker in my Nova Grappler deck.

Your vanguard’s or rear-guard’s original critical increases to two for the rest of the gamer. This marker does not stack. Your unit’s critical will not increase to three, four, or more by placing more than two markers on a circle.

The new Force II marker is the strongest Imaginary Gift in my opinion. The unit with this gift will constantly pose a major threat. Your opponent does not want to take any damage from this unit. I would place the gift on a rear-guard circle in the front row to spread the pressure on the field. My vanguard always has the potential of checking critical triggers. My opponent must reconsider how he or she is going to guard.

Place this marker on any rear-guard circle. Units on this circle gain 5,00 power and 10,000 shield (includes intercepting) during both player’s turns.

Protect II solves a major problem that Protect clans encountered from cards like Dragonic Waterfall. Protect markers would be useless against cards that prevent players from guarding with Protect markers. It was the only gift that can potentially become useless. Protect II gives players a gift that can be used against cards like Dragonic Waterfall.

These new gifts bring new strategies and elevate clans that had struggles during the first year of the standard format. I am curious about players’ opinions on the Imaginary Gifts. Please cast a vote on your favorite Imaginary Gift in the poll. Also, leave a comment if you want to explain your vote! I am looking forward to the community’s responses!