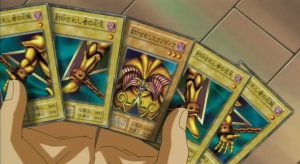 Most players focus on winning duels by decreasing their opponent’s life points to zero. This strategy is the most common method to win games. In addition to the conventional method of winning games, there are alternate win conditions in Yu-Gi-Oh! Cards with win conditions have been in Yu-Gi-Oh! since the very first booster set. Legend of The Blue-Eyes White Dragon started this trend with the introduction of Exodia.

The majority of these cards and characters appeared in the animated series. Destiny Board, Exodia, Exodius the Ultimate Forbidden Lord, and Holactie the Creator of Light appeared in the original Yu-Gi-Oh! series. These appearances lead the cards getting hype from players because the anime’s story claims these cards are good. However, the cards do not live up to players’ expectations in the real game. These cards are fun to play in casual decks. 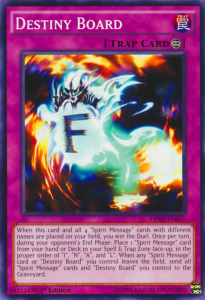 Destiny Board is the worst card with an alternate win condition in Yu-Gi-Oh! You instantly win the game with all Spirit Message cards on the field, but it is easier said than done. If one card from this board is sent to the graveyard, then all Spirit Message cards and Destiny Board are sent to the graveyard. Your chances of pulling off this victory are extremely slim. There are many cards such as Mystical Space Typhoon that will end your strategy faster than Vanilla Ice’s career.

Exodia the Forbidden One 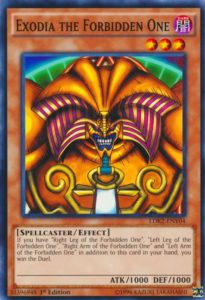 The five pieces of Exodia are the original cards that instantly win games. You must have all five pieces of Exodia in your hand, and you win the game. The conditions are very simple on paper. However, you need a lot of luck on your side. All five cards of the “Forbidden One” are limited to one copy per deck. 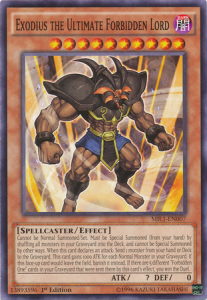 Konami loves Exodia so much that they created support with instant win conditions related to the forbidden one. Exodius the Ultimate Forbidden Lord is the next evolution of Exodia. This monster makes the five pieces useful cards for battle as it gains attack points for each normal monster int he graveyard. Furthermore, Exodius the Ultimate Forbidden Lord sends a “Forbidden One” card from the deck to the graveyard. Then, you win the duel when all five pieces of Exodia are in the graveyard by this effect.

Unfortunately, Exodius the Ultimate Forbidden Lord has serious weaknesses. First, he must declare an attack to trigger his first skill of sending a monster card to the graveyard. An opponent can easily counter the attack with a Trap Card or monster’s effect. Secondly, Exodius the Ultimate Forbidden Lord starts the duel as a weak monster and only becomes a threat with three or more normal monsters in the graveyard. Your opponent can easily and quickly destroy him.

Exodia, Master of The Guard 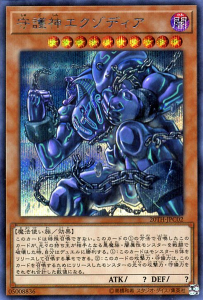 Players are very unlikely to tribute five monsters for a summon. There are many good options when you have two or more monsters on the field. You can perform Link Summons, Synchro Summons, and XYZ Summons, and those monsters have better effects than Exodia, Master of The Guard’s effects. Furthermore, you save resources by playing your better options. You are not overextending your resources and risking a quick defeat if Exodia, Master of The Guard fails. 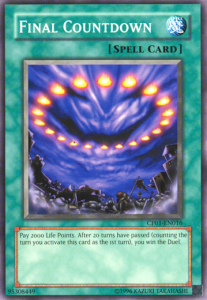 Final Countdown is one of the most annoying alternative win conditions and decks to ever play against. Its player wins the duel after twenty turn passed. The deck has a defensive strategy, and attempts to counter every card that you try to play. A Final Countdown deck is filled with cards such as Bottomless Trap Hole, Solemn Judgment, and Solemn Warning.  I always feel frustrated against decks that prevent me from playing my favorite cards, and Final Countdown is one of those decks.

However, Final Countdown is not an unbeatable deck. You can overcome this deck if your opponent is unable to draw their signature card. You can also destroy their traps by playing cards such as Mystical Space Typhoon. Then, you avoid losing your monsters after they are summoned. This must be done before twenty turns pass after Final Countdown’s activation. 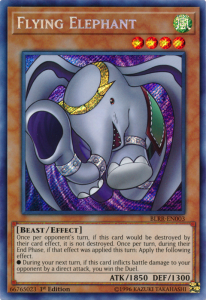 One of the least known alternate win conditions is from Flying Elephant. This unique card wins the duel if an opponent attempted to destroy it by an effect, and it inflicts damage to your opponent. Then, you win the game under these odd conditions. Unfortunately, opponents can easily dodge its win conditions by destroying Flying Elephant in battle. An opponent can also banish it from the field. 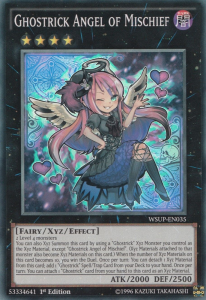 Ghostrick Angel of Mischief wins the duel when she has 10 Xyz Materials attached to her. Her first effect adds Xyz Material from an Xyz Monster after it is used to Xyz Summon her. You start with three Xyz Materials, and are walking closer to victory. Furthermore, her last effect also attaches one Ghostrick cards to her as Xyz Material. I like this effect as helps set up the alternate win condition.

However, Ghostrick Angel of Mischief does not have any protection. Her skills do not protect her from anything from your opponent. You need several turns to win the duel with her skill, and your opponent has many opportunities to remove her from the Ghostrick Angel of Mischief. Players can easily use effects to banish or destroy her. Players may also destroy her in battle with a powerful monster.

Holactie the Creator of Light 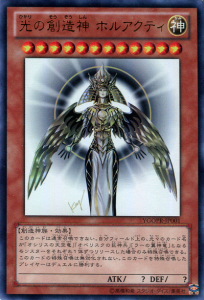 One of the least known cards with a victory condition is Holactie the Creator of Light. This powerful card has only been released in Japan. I am surprised it has never been released in the English format. This card with amazing artwork debuted in the original Yu-Gi-Oh! anime series. She defeated the series’s main antagonist Zorc Necrophades in the final conflict.

Holactie the Creator of Light wins the duel when she is special summon to the field. However, summoning this card is extremely difficult. You must first summon all three of the Egyptian God cards. That requires nine tributes, and you must tribute the Egyptian Gods to special summon Holactie the Creator of Light. That is a total of twelve tributes for a win condition.

Number 88: Gimmick Puppet of Leo wins the duel when he has three Destiny Counters. The effect sounds cool for an alternate win condition. However, Leo has a major flaw that opponents can easily exploit. You are unable to protect Number 88: Gimmick Puppet of Leo with Spell and Trap cards. An opponent can destroy him with a card such as Dark Hole, or destroy him by battle with a stronger monster.

Vennominaga the Deity of Poisonous Snakes 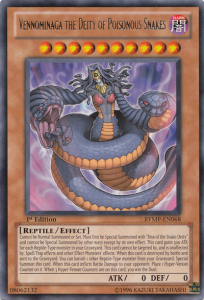 Vennominaga the Deity of Poisonous Snakes is one of the rarest cards that you will ever duel against. She wins a duel by having three Hyper-Venom Counters. She gains counters by inflicting battle damage to your opponent. She also gains 500 ATK for each Reptile-Type monster in your Graveyard, and your opponent can only destroy her by battle. She is unaffected by Spell Cards, Trap Cards, and Monster’s effects.

Yu-Gi-Oh! has the most difficult alternate win cards in trading card games. The majority of these cards have a very slim probability of success. The cards appear to be serious threats in the anime, but reality tells a different tale from the animations. I recommend playing these cards in casual decks against your friends.