This guide provides the basic details of building a deck. I will teach you the basics of the D-Standard format of Cardfight!! Vanguard. You will need at least a start deck and cards from booster sets. Some decks requires you to build them with cards only available in booster sets.

Your deck is a team of units and mystical items with the common goal of victory. They are unique beings or items from planet Cray. Your units are the main cards in a deck. They provide offense, defense, and special abilities.

In addition, your deck needs a strategy with a plan for victory. Your deck needs to include a grade 3 unit or vanguard with a powerful finisher to overwhelm and defeat opponents. Units in your deck need to complement each other abilities and the deck’s theme.

Archetypes are a group of cards with a common name in their titles, and they share a unique theme. They work together for the deck’s strategy and finisher. Their abilities complement each other and the deck’s overall strategy. Most cards in an archetype specialize in their group.

In addition, decks with an archetype mostly feature cards in the archetype. This type of deck has consistency because the units have powerful combos. They help your vanguard’s finisher to win games. 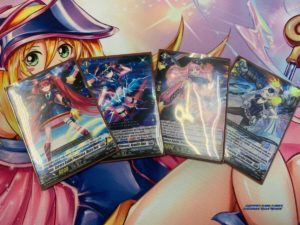 Bushiroad introduced the Ride Deck for the D-Standard format. This concept adds consistency and an enjoyable experience to the game. This concept places four cards of grades 0 to 3 from the main deck to a small deck, and these are included in the number of cards in the main deck. You may ride each card from this deck.

A ride needs four cards with strong abilities for the deck’s strategy. The grade 3 unit should be the deck’s main vanguard. You can always ride it if you do not have a copy in your hand.

In addition, a Ride Deck provides additional support for Persona Ride. You may play a copy of a grade 3 from your hand for your first grade 3 vanguard. Your second grade 3 with the same name may ride from the Ride Deck and this strategy activates Persona Ride.

A deck in Cardfight!! Vanguard includes 50 cards, and this number includes cards in the Ride Deck. You may only play a maximum of four copies of a card with the same name. A deck consists of grades from grade 0 to grade 3.

The Ride Deck and strategies from the D-Standard Format have changed the common strategy for decks’ ratios. There is not a true definition or standard for a deck’s ratio. It truly depends on the archetype and its strategy. All of the cards that you need to ride are already in the Ride Deck.

For example, Apex Ruler, Bastion has an aggressive strategy and he strongly relies on grade 3 units. A deck with Apex Ruler, Bastion will have more grade 3 cards than most decks. This deck values a strong offense more than defense from units with shields such as grade 1 and grade 2 units.

A good rule of thumb is placing units of all grades in your deck. I recommend testing the best ratio for your deck. You will need defensive shields from grade 1 and grade 2 units. They also provide abilities for your strategy.

Triggers are units with a special effect that activates when you reveal them during your drive check. They add an element of luck to the game. There are five types of triggers in the D-Standard Format. These triggers are critical, draw, front, heel, and over.

The most powerful trigger in Cardfight!! Vanguard is the Over Trigger. This special type of card can turn the tide of the game in your favor. Over Triggers give one million power to any unit and they  have additional effects. Their effects complement their nation’s strategy.

Furthermore, Over Triggers have the highest value for shields in Cardfight!! Vanguard. Their shields have 50,000 power, and they can block most attacks in the game. You gain a strong defense when you draw an Over Trigger. 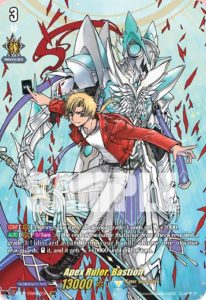 Personal Ride is a unique mechanic for the D-Standard format. It is an exclusive mechanic for grade 3 units. You activate Persona Ride when you ride a grade 3 with the same name as your vanguard. Then, Persona Ride gives 10,000 power to all units in the front row.

In addition, all nations have grade 3 units with this ability. Many cards have powerful finishers for their Persona Ride. Read your units’ effects and you may gain additional abilities from these units when you activate Persona Ride. 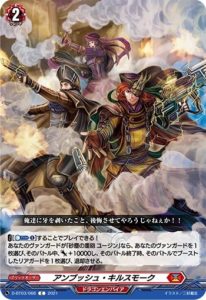 Orders are mystical items or situations from Cardfight!! Vanguard. These cards grant special abilities for your units. You can increase their power, search for cards, and create environments on the field.

The number of order cards in your deck depends on the deck’s strategy. Some decks may play many order cards for their units’ abilities. On the other hand, some decks may not play this type of card.

You may activate normal orders during the Main Phase. They go to the drop zone after use.

You may play a blitz order during the guard step. These cards normally have defensive abilities and the counter the opponent’s offensive strike. Then, they go to the drop zone after this.

A set order remains on the field, and its effects are active abilities under the proper conditions.

Defense sometimes become an afterthought due to the stellar offense from cards. You should never overlook defensive cards. You need to block attacks to avoid losing. The D-Standard Format has many cards for defense.

I recommend playing four sentinels in a deck. Sentinels provide the best defense in Cardfight!! Vanguard. They neutralize an opponent’s attack with the cost of discarding a card. Sentinels are a safety net against the strongest attacks in the game, and they are the only defense against an Over Trigger in the D-Standard format.

Furthermore, you may only play four sentinels in a deck. You must make wise decisions when you play them. The time to play a Sentinels depends on the opponent’s deck and your current amount of damage.

Blitz orders are another type of card for defense. You can play this type of order during the opponent’s turn. Blitz orders typically have effects to help you defend your units. They add power to your vanguard to defend against the opponent, and other cards decrease the opponent’s vanguard’s power.

Archetypes and nations have special units for defense. These units have effects with defensive abilities. They often increase the value of their shields or negate attacks under specific conditions. I recommend playing these cards in your deck.

The Final Word of Advice:

Overall, the D-Standard format of Cardfight!! Vanguard offers a lot of creativity with each nation. The Ride Deck allows you to test unique ratios for your strategy. I recommend testing a variety of decks with your favorite cards.