The only man to achieve immorality from the Dragon Balls is Garlic Jr. He is the only original movie character to actually appear in the anime, despite not being a character in the manga. Garlic Jr. is a psychopath with the desire to transform everyone into evil servants and rule world with pure violence. In Dead Zone, he uses the Dragon Balls to become immortal. He later returns in the Garlic Jr. Saga, and uses the  Black Water Mist to turn Earth’s inhabitants into evil slaves. Both times Gohan defeated Garlic Jr. by returning him into the Dead Zone. 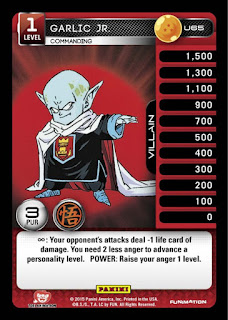 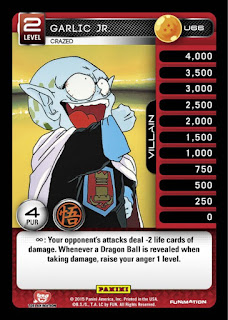 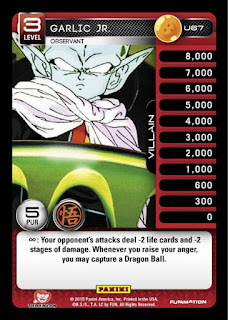 Garlic Jr. Observant
Your opponent’s attacks deal -2 life cards and -2 stages of damage. Whenever you raise your anger, you may capture a Dragon Ball. 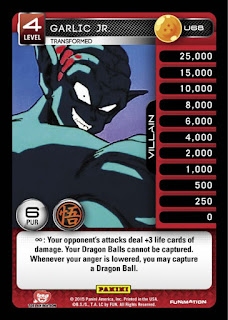 Garlic Jr. Transformed
Your opponent’s attacks deal +3 life cards of damage. Your Dragon Balls cannot be captured. Whenever your anger is lowered, you may capture a Dragon Ball.

Garlic Jr. is full of awesomeness. His is power level and skills are based on his first appearance in Dead Zone. He is the first non-Namekian character to have a strategy around the Dragon Balls. He requires Dragon Balls to reveal his full potential as your Main Personality. His first three levels are also very defensive. He takes less damage than normal from attacks. This makes up for his low power level. His level four protects your Dragon Balls from being captured by your opponent. He rushes to win games either by MPPV or Dragon Ball victory. Garlic Jr.’s anger either increases when a Dragon Ball is revealed as damage or captures a Dragon Ball when his anger changes.