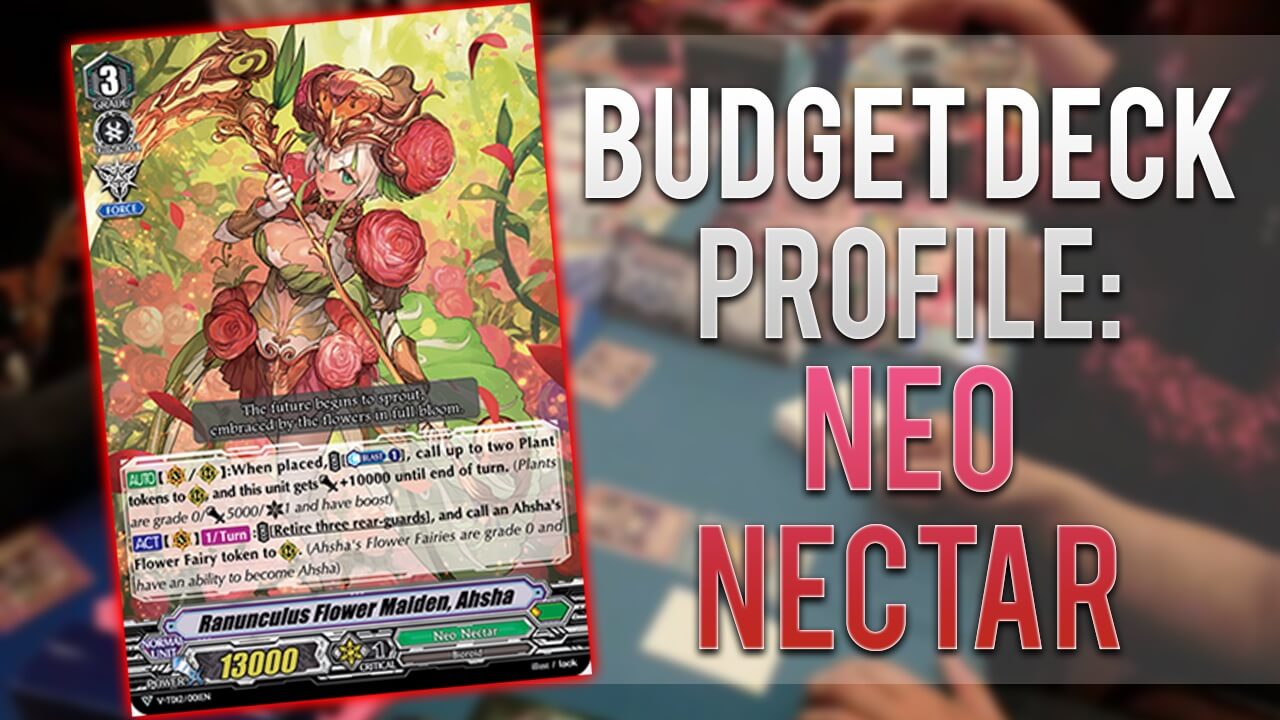 I was excited when Bushiroad announced V-Trial Deck 12: Ahsha. Neo Nectar was one of my favorite clans to play from Cardfight!! Vanguard G. I decided to build a casual deck with Ahsha and Neo Nectar for the standard format. I also wanted to create an easy deck for new players.

Neo Nectar is one of the easiest clans to master in the standard format. The purpose of this particular deck is a starting point for new players and a simple deck for casual players. All of the cards have synergy with each other for consistency.

The deck’s key card is Ranunculus Flower Maiden, Ahsha. The deck’s strategy is creating a strong column for the vanguard and Ahsha’s Flower Fairy Token. The majority of the deck’s power come from those two units on the field.

Efficiency and consistency is the key to every deck’s success. All of my grade 2 units superior call Planet Tokens to the field. I can consistently activate Ranunculus Flower Maiden, Ahsha’s ability to superior call an Ahsha’s Flower Fairy Token.

Blossoming Maiden, Cela is one of the key rear-guards in the deck. She provides consistency and resources. Her ability to create Planet Tokens is an ACT, and I may use her ability once per turn. She gains 5,000 during my turn. Furthermore, my opponent cannot retire her if I have a rear-guard with the same name as my vanguard.

My budget deck for Neo Nectar requires a lot of counter blasts. I need to conserve resources, and play cards with free abilities. Blowball Squire and Sunlight Garden’s Guide have the ability to superior call Plant tokens without a cost. I can gain two Plant Tokens from those units. I also save my counter blasts and cards in my soul for Ahsha and my other units.

I am playing four Draw Triggers, four Heal Triggers, and eight Critical Triggers. I prefer this particular lineup for most of my decks. The deck includes Maiden of Blossom Rain for its perfect guard.

My budget Neo Nectar deck’s weakness is the lack of power. Most attacks do not swing large numbers. The Ahsha’s Flower Fairy Token is an ineffective unit with very little pressure if Ranunculus Flower Maiden, Ahsha’s power remain 13,000. The additional critical from Force II is not a threat when the opponent only needs a single card to block an attack.

I have tested my deck with my friends from the local card shop. The above video is a demonstration of Ranunculus Flower Maiden, Ahsha in action. I chose Imaginary Gift: Force II for my marker in the game. It forced pressure on opponent, due to its massive damage. I gave Imaginary Gift: Force II to Ranunculus Flower Maiden, Ahsha, and Ahsha’s Flower Fairy Token also gained the benefit of the additional critical to deliver two damage!

All in all, I enjoy playing my Neo Nectar budget deck. I recommend the deck to new players with interest in Cardfight!! Vanguard. Most of the units are inexpensive cards. The team of cards is not the strongest deck, but I enjoy playing it for casual games. Consistency is the key for every budget or casual deck. I need to be able to consistently activate combos and abilities.