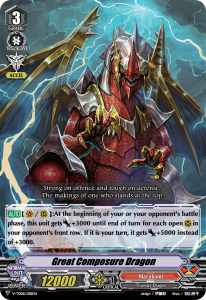 Strong on offence and tough on defense. The makings of one who stands at the top.

Overall, Great Composure Dragon is an overrated card. The anime promotes this card as being a great card for veterans, but it is a mediocre card in reality. His surge of power is a nice skill. Unfortunately, it is his only skill, and he does not influence the game. Opponents can play around this card’s skill during their turns to prevent it from gaining power.