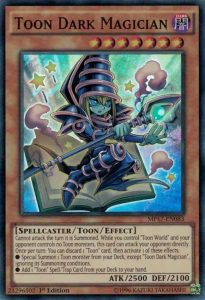 Cannot attack the turn it is Summoned. While you control “Toon World” and your opponent controls no Toon monsters, this card can attack your opponent directly. Once per turn: You can discard 1 “Toon” card, then activate 1 of these effects;
● Special Summon 1 Toon monster from your Deck, except “Toon Dark Magician”, ignoring its Summoning conditions.
● Add 1 “Toon” Spell/Trap Card from your Deck to your hand.

Toon Dark Magician cannot attack during the same turn that it was summoned. The purpose of this effect balances the monster’s power. Toon Dark Magician has the ability to directly attack an opponent. He would be a too fast, powerful, and unbalanced monster without this limitation.

Toon Dark Magician shares the same effect as most Toon monsters. The ultimate spellcaster can directly attack an opponent if your control Toon World and your opponent does not control a Toon monster. You can deliver massive damage to an opponent.

Furthermore, Toon Dark Magician provides a lot of offense. Dark Magician deals 2,500 points of damage to an opponent. That is more than a quarter of a player’s life points.

Toon Dark Magician uses his magic to special summon a Toon monster from the deck. The effect also ignores the summoning conditions of the card. You have a huge library of monsters to choose from. Furthermore, you must discard a “Toon” card to activate this effect.

This is a versatile effect. You can special summon a monster for each situation. For example, Toon Buster Blader is a good card against opponents with dragons. Toon Black Luster Soldier is always a great monster with the effect to banish an opponent’s card.

Toon Dark Magician’s fourth effect adds a Trap or Spell from the deck to your hand. Toon has many effective Traps and Spells. You can discard one card and add a more useful card to your hand. For example, you may add Toon Table of Contents to your hand. It is an effective ability to get access to your best cards.