Today’s article is for beginners to learn the basics about every Triggers’ pros and cons. Every trading card game is based on luck such as any game from video games to sports. Triggers are unique to Cardfight!! Vanguard as the concept has not been seen in other trading card games. Every Trigger has its purpose to help turn tide in its owner’s favor. Momentum can suddenly swing in the attacker’s favor by deciding the game’s outcome. You may be in control of the match for a moment, and suddenly a trigger can put the game in your opponent’s hand. Particular clans have strategies based around certain Triggers such as Nova Grapplers’ great chemistry with Stand Triggers. Oracle Think Tank’s defensive mindset with Draw Triggers, and Kagero’s relentless assault with Critical Triggers. Arguably the most game changing Trigger in the game is the Critical Trigger. Critical Triggers give attacking Vanguards and standing units an additional critical to increase the attack’s amount of damage. Checking a Critical Trigger can easily turn the tables in any game by quickly ending it or pushing your opponent on the brink of defeat. Many players use 12 Critical Triggers in their decks to maximize the probability of checking Critical Triggers during their Twin Drive. This has become the most popular lineup in many decks if the clan or archetype have enough Critical Triggers to completely fill the lineup. A few players will also take a gamble by playing decks with 16 Critical Triggers and zero Heal Triggers.

One of the biggest complaints about Critical Triggers are how players win games without skill by checking this Trigger. You will either leave as the ecstatic victor or the disappointed loser on the negative end of a double Critical Trigger. Players often over guard or use a Sentinel to avoid an embarrassing defeat. An unguarded vanguard can check back-to-back Critical Tiggers for an early victory during the mid-game. 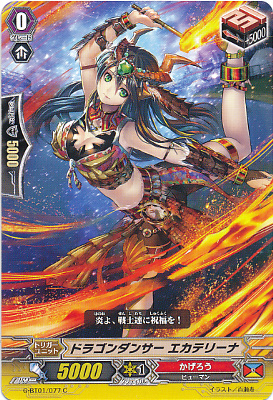 Draw Triggers do exactly what is in, their names. You draw a card every time your Drive Check or Damage Check reveals a Draw Trigger. If its free, then its me! Hand advantage plays a major role to be able to defend yourself and set up your formations. You want to continuous build your hand size to consistently defend your vanguard and avoid Critical Triggers from spoiling your fun.

Draw Triggers are the only Triggers to always benefit the player unlike the other Triggers. I always find satisfaction when I always get this Trigger because I’m going to get a free draw. The best possibilities are to draw a Perfect Guard or a unit that you need to ride as your deck’s featured boss.

However, Draw Triggers’ main flaw is it having a 5K shield instead of a 10K like its respected counterparts. The card you draw may be a grade 3 without a shield to increase your hand’s defenses. Choosing to add Draw Triggers in a deck removes 5K of shield for each one you add to your deck. 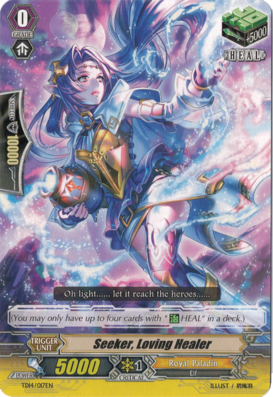 Heal Triggers recover one point of damage when they are revealed during a Damage Check or Drive Check. This is the primary method of recovering damage in gameplay. Playing the maximum amount of Heal Triggers at four is standard. This handy Triggers only activate when you have equal or more damage than your opponent. Every player hopes to check the game saving Heal Trigger when they check for their sixth damage. If you drive check or damage check a heal trigger when you less damage than your opponent, then you lost an opportunity to heal yourself.

My biggest problem with Heal Triggers is not being able to heal regardless of my opponent’s damage. If I have less damage than my opponent and check a Heal Trigger, then I just wasted a potential opportunity to heal later in the game. Legion has somewhat resolved this conflict as you can return cards to the deck when you perform Legion. However, there is still no guarantee that I will be able to check a Heal Trigger when I may need it later during the game. 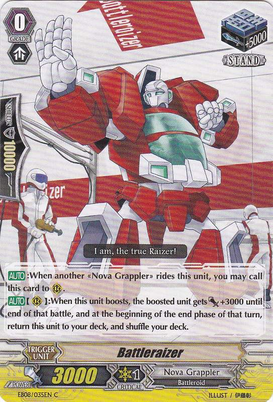 Kamui’s favorite trigger is the offensive Stand Trigger. This Trigger should come with no surprise. Cardfight Vanguard has always been an offensive game as the majority of cards have offensive skills. Stand Triggers stand a resting rear-guard to allow it to attack again in the same turn. It is similar to the Critical Trigger by increasing the amount of damage given for the turn. The only difference is the standing attacker’s attack must hit the opposing vanguard.

Stand Triggers have the potential to be the best Trigger based on giving the player multiple attacks per turn. They will unexpectedly increase the amount of pressure. Your opponent can attempt to block every attack by only having an empty hand afterwards or your opponent will carefully choose which attacks to block. You can quickly demolish your opponent’s defenses and launch an unstoppable wave of attacks!

However, this Trigger is only effective on your turn because standing a unit during your opponent’s turn is just wasting a Trigger. Stand Triggers share Critical Triggers’ flaw is only being useful during your turn when you are on the offensive. Standing a unit when you are defending is not going to give you any advantage for the turn. The increase in 5K power is useful in increasing your defenses, but Stand Triggers’ primary purpose is to regenerate an offensive assault.

The best Triggers to play in a deck depends on the deck’s strategy and playstyle. There is a case for each Trigger to be included in the starting lineup. Momentum is elusive and once a Trigger gives it to you, then your deck can unleash its full potential. Great combos will lead to great plays to make the difference in a game. Test multiple combinations to find the best combination of Triggers to be in your starting lineup.