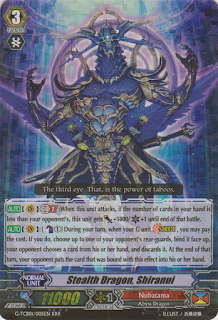 The taboo eye, is said to hide a power that no one has ever seen.

The Nubatama clan has a good reputation of being a righteous clan. However, almost every clan has defects. Stealth Dragon, Shiranui becomes the leader of the proud Nubatama clan. He is able to quickly raise his rank because he learns the ability to use Stride. New generations are able to join Nubatama in combat. Stealth Dragon, Shiranui abuses his authority and has developed an evil eye.

Stealth Dragon, Shiranui has one of the most powerful Stride skills. He forces the opponent to bind a rear-guard face up and discard a card from his or her hand. It negates the triple drive to an extent. The opponent loses two important cards to use for defense. An opponent may be forced to choose between defense and having cards to discard for Stride. Stealth Dragon, Shiranui and his comrades will find it easier to connect their attacks.

The Generation Break is a tad disappointing. Stealth Dragon, Shiranui gains 5,000 power plus one critical if you have less cards in your hand than your opponent. This situation is very unlikely because your vanguard’s first skill decreases your opponent’s hand. Do not expect to use this skill very often. However, the Generation Break makes up for lost power if you are unable afford to the cost for Stride. Striding to a G-Unit is a far better option if you can pay the cost for Stride.

Overall, Stealth Dragon, Shiranui has one of the best Stride skills from the generation era. Forcing opponents to discard cards is a major advantage against any deck. The skill slowly drains opponents’ resources and decreases their defensive capabilities. Unfortunately, his Generation Break skill leaves more to be desired. It’s not horrible, but I have seen better skills. Continue to stride G-Units and you will be just fine in games. Stealth Dragon, Shiranui will dominate the world with the evil Nubatama!