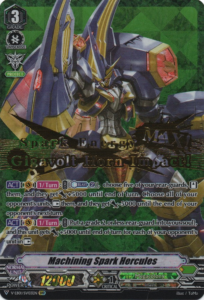 Machining Spark Hercules is the first rebooted card from the Limit Break era to debut in Cardfight!! Vanguard V. I welcome his new version. He is no longer bound the limitations of Limit Break. You may use his abilities when you are able to without worrying about your amount of damage. He is now a faster and more playable card than his original version.

Machining Spark Hercules’s first skill stands your rear-guards and they gain 5,000 power. Then, you rest your opponent’s units and they lose 5,000 power until the end of your opponent’s next turn. His skill is one of the best defensive tactics in the game. It weakens rear-guards to it easier to block their attacks, and you would only need to use a few cards to block attacks. The skill also makes some rear-guards unable to hit Machining Spark Hercules without getting help from skills and triggers.