Chouchou performs Bermuda Triangle’s strategy of drawing additional cards with style. Their strategy is sending units back to the deck to draw attacks and gain additional attacks in combat. The strategy is performed with many combos. Cards interact with each other. Some cards send cards back to the deck and then other cards have effects that trigger after a card is returned to the deck. 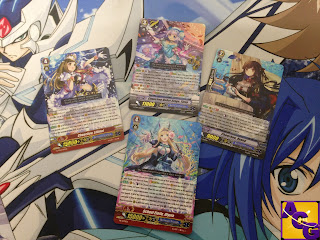 I cannot overlook Chouchou’s supporting cast! They work as a well oiled machine. Chouchou, Ayana is one of my favorite rear-guards in the archetype. She returns to the deck, allows a player to draw a card, and a player can superior call a new unit to the field for an extra deck. Chouchou, Palffy is one of the easiest G-Guardians to satisfy its requirements. A player only needs three cards in his or her hand for she can 5,000 shield to create a 20,000 shield.

Each trial deck includes one of three promo cards. They are Duo Absolute Sister Meer, Cheerfully Etoile Olyvia, and Dreaming Step, Shizuku. Every promo is in a foil. I pulled Olyvia in both trial decks. This is great for my deck. Olyvia requires at least two copies of herself to be able to play her. She finally received a proper reprint in foil unlike her first reprint. My G-Deck gains two extra cards and they are copies of one Bermuda Triangle’s best G-Units.

I love my Chouchou. I call it my hot white women deck because these divas are pure perfection. I purchased two copies to have a full set of the G-Zone and Chouchou Debut Stage, Tirua. Chouchou is a very consistent and strong archetype. Every card play in perfect harmony. I am gaining huge advantages in the early stages of every game. One game became lopsided very quickly. I was able to increase my hand to over ten cards after my first stride. The large hands make defending much easier.

Debut of The Divas is the strongest trial decks as of today. Players only need to purchase two copies to build an efficient deck. You will only spend up to $40 for a good deck. Players receive a lot of resourceful cards in a single trial deck. Players get two G-Units, two G-Guardians, two strong grade three cards, and a great supporting cast of cards with powerful effects. Chouchou Debut Stage, Tirua and Chouchou, Lillinel are my favorite cards from the trial deck. Lillinel is a special card because her art is awesome! Their abilities can easily put a game in a player’s favor. I strongly recommend players to buy this deck. Do not underestimate beautiful mermaids.