Yu-Gi-Oh! 5D’s is my second favorite Yu-Gi-Oh! series after the original series. Each hero has a dragon as his or her best card. It is fitting for Yusei’s dragon to be the mightiest dragon of them all. Yusei’s signature card Stardust Dragon is the franchise’s best card from a main character. It has seen the most play than every other card from a main protagonist. Yusei used Stardust Dragon many times in the clutch to win big games. Stardust Dragon has many evolved forms throughout the years. The majority of its forms and counterparts are Synchro monsters. Stardust Dragon set the standard for Synchro monsters. Yusei’s signature dragon has similar stats to main protagonist’s signature monsters. Stardust Dragon was one of the most powerful cards in the game after its first release in the TCG. It gave players protection over their field during either player’s turn. It would return to the field at the End Phase. 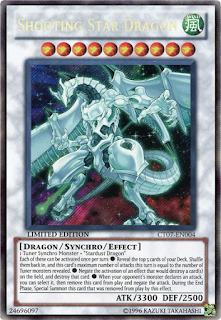 Shooting Start Dragon becomes Yusei’s trump card in season two. Yusei plays Shooting Star Dragon to defeat the Nordic Gods, and helps Yusei triumph over Zone. It has the highest risk and reward effect. Shooting Star Dragon’s first skill reveals the top five cards of the deck, and it can attack as many as tuners revealed by the skill. You can potentially attack up to five times or cannot attack if zero tuners are revealed by the skill. 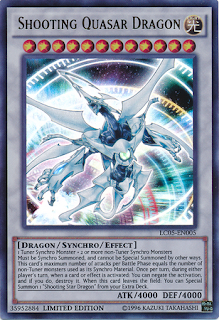 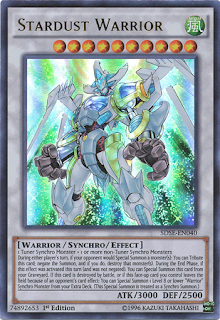 Stardust Spark Dragon is similar to its counterpart. It has the ability protect one card on the field for an entire turn. You do not need to banish Stardust Spark Dragon to activate the effect. The effect can be used doing either player’s turn. However, the original card can be seen as a far superior card as it protects the entire field from one card.

Stardust Dragon and its various forms will remain as some of the best and most popular cards in Yu-Gi-Oh! Stardust Dragon has made the most impact in the game than every other main character’s signature monster. Many decks take advantage of its effects. It provides great field protection and protecting yourself is a key element in every trading card game. I play Stardust Dragon in my Supreme Spellcasters deck and Lightsworn deck. OTK decks for Shooting Quasar Dragon will continue to excite players. Unleash The Creation Burst!