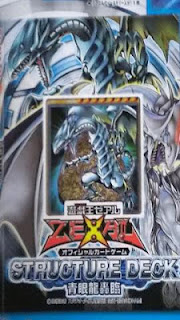 Here’s a sneak peak at what’s to come with the upcoming structure deck The Blue-Eyed Dragon’s Thundering Descent! The deck’s featured card is Blued-Eyed Silver Dragon. It’s great to see synchro monsters get new support! The new structure deck is scheduled to be released in Japan on June 12th!

1 Tuner + 1 or more non-Tuner Normal Monsters
When this card is Special Summoned: Until the end of the next turn, Dragon-Type monsters you control cannot be targeted or destroyed by card effects. Once per turn, during your Standby Phase: You can target 1 Normal Monster in your Graveyard; Special Summon that target.

This legendary dragon is a powerful engine of destruction. Virtually invincible, very few have faced this awesome creature and lived to tell the tale.

Guard of the Storm Dragon