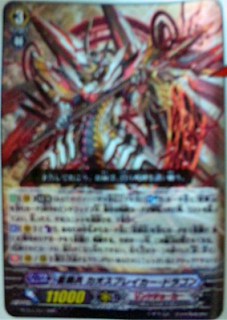 [AUTO](VC) Limit Break 4 (This ability is active if you have four or more damage):[Soul Blast (1)-card with “Star-vader” in its card name] During your opponent’s end phase, when one of your opponent’s locked cards is unlocked, you may pay the cost. If you do, retire that unit, and draw a card.
[ACT](VC):[Counter Blast (1) & Choose a card with “Star-vader” in its card name from your hand, and discard it] Choose one of your opponent’s rear-guards, and lock it. This ability cannot be used for the rest of that turn. (Locked cards are turned face down, and cannot do anything. Turn them face up at the end of its owner’s turn)
[CONT](VC/RC): Lord (If you have a unit without a same clan as this unit, this unit cannot attack)

Star-vader Chaos Breaker Dragon‘s skills were leaked this past weekend. He has a very interesting limit break skill. Instead of gaining power, he retires opponents’ units during their end phase. This is another offensive and defensive strategy by Link Joker. He can either remove an offensive unit like Silent Tom or a defensive unit like Knight of truth Gordon. Expect Star-vader Chaos Breaker Dragon to make some noise! He will make this debut in BT13-Catastrophic Outbreak!