Aichi has plenty of experience under this belt. He has battled the top card fighters in Japan at the shop tournament and nation tournament. He now has a better understanding of the rules, card effects, and strategies. He will use his newfound skills to lead Team Q4 to a national championship.

For instance, Aichi was playing better than ever! He was creating good strategies that helped him reach the next level. His improved play led Team Q4 to their first national championship. Aichi made the tournament’s best play against Team Caesar when he rode Alfred Early to superior call Blaster Blade from the soul. He crushed Kenji’s defenses by using Blaster Blade’s skill to retire Cosmo Break. This game winning play led Team Q4 to the nation championship match!

Most importantly, Aichi has fixed his defensive problems. He was drunk on guarding during the first half of season one, and this left him with empty hands during the late game that led him to defeat. He now has enough cards to defend against attacks during the late game. He finally stopped unnecessarily calling and riding Flash Shield Iseult. A card fighter should only ride a perfect guard when it’s his or her only option. Offense sales tickets. Defense wins championships. 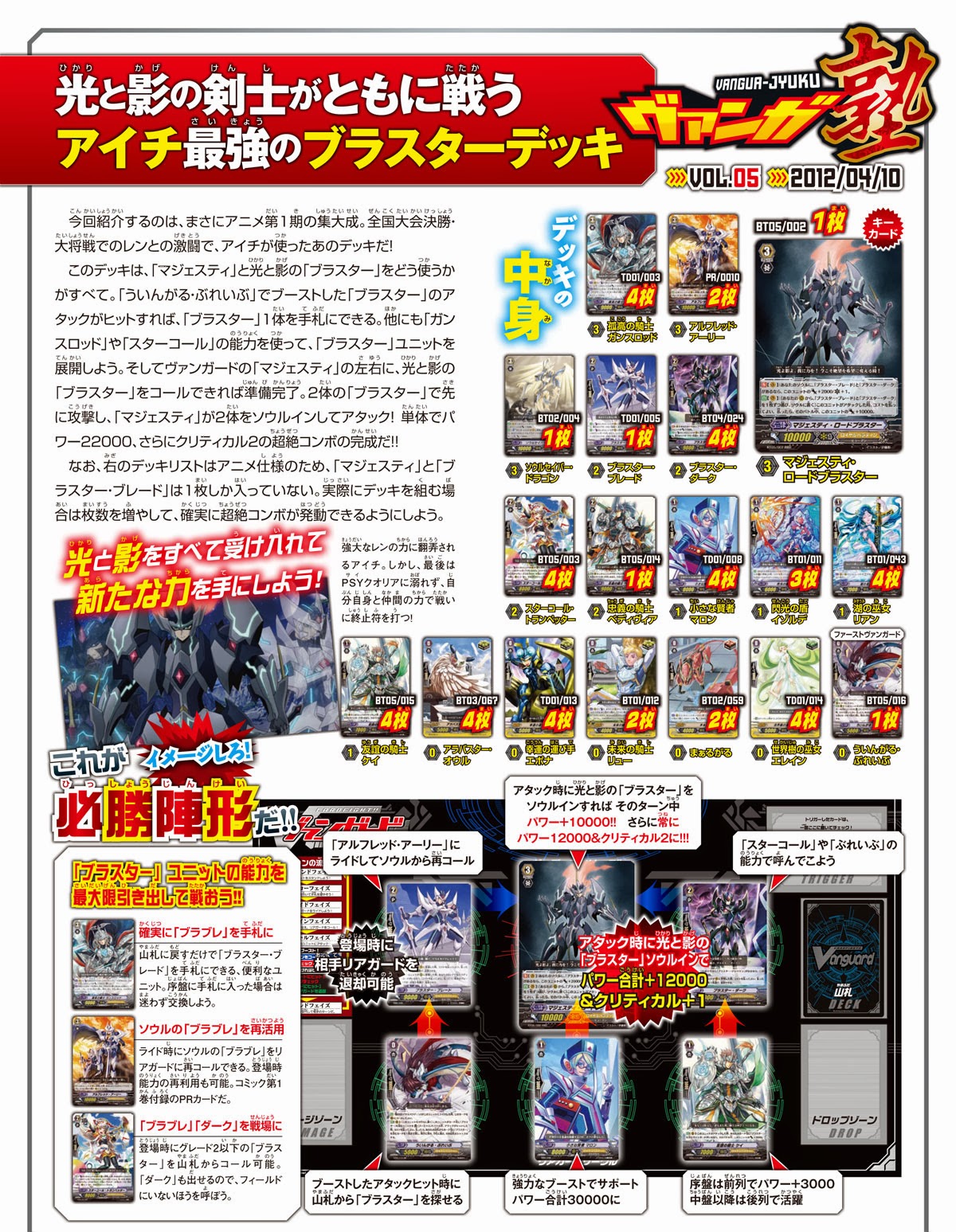 However, Aichi’s deck building skills were still sub-par. I’m not going to look at his Shadow Paladin deck
because Ren built it for Aichi. Let’s take a good look at Aichi’s Majesty Lord Blaster Deck (the image on the right). This deck is an absolute disgrace to every MLB player on God’s green Earth. Ren Suzugamori should be ashamed of himself for losing against one of the worst built decks that looked like it was built by Morikawa. One of the deck’s main problems is the lack of Blaster Blades in the deck because Aichi only uses one Blaster Blade per deck. Majesty Lord Blaster decks heavily depend on Blaster Blade and the deck would be weaken without him. His deck would be very inconsistent in real life. Why doesn’t Aichi run multiple copies of Blaster Blade? This is really bothersome because Ren always plays the maximum amount of Blaster Dark and Blaster Dark Revenger cards in each deck.

Furthermore, this deck should not have any copies of Solitary Knight, Gancelot. He is not a useful card for this type of deck. Aichi did not consider a situation where Gancelot would be his only option to ride as the grade 3 vanguard. He should have considered this possibility because he has a much higher probability to draw Solitary Knight, Gancelot than Majesty Lord Blaster. Not to mention, using Gancelot’s skill twice would still be far weaker than Majesty Lord Blaster’s skills. Gancelot is a very weak 9k vanguard and would be dominated by Phantom Blaster Overlord. This is a prime example of Aichi badly needing to work on building better and more consistent decks.

In conclusion, Aichi has shown improvement in his play. He has cleaned up many of his past mistakes such as over guarding and unnecessarily riding perfect guards. However, his deck building skills need major work. It is very illogical to run only one copy of Blaster Blade and Majesty Lord Blaster in a Majesty Lord Blaster deck. It was a miracle that Aichi was able to defeat the great Ren Suzugamori with a terribly built deck. At least Aichi is moving into the right direction by improving his offensive and defensive techniques. Be sure to tune in for part three when I discuss Aichi’s poor decision to dump Great Silver Wolf, Garmore for Incandescent Lion, Blond Ezel.