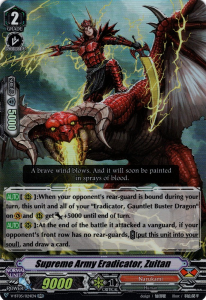 A brave wind blows. And it will soon be painted in sprays of blood.

[AUTO](RC):When your opponent’s rear-guard is bound during your turn, this unit and all of your “Eradicator, Gauntlet Buster Dragon” on (VC) or (RC) get [Power]+5000 until end of turn.
[AUTO](RC):At the end of the battle it attacked a vanguard, if your opponent’s front row has no rear-guards, COST [put this unit into your soul], and draw a card.

This skill is a useful ability against control decks. You can send him to the soul to avoid your opponent from retiring him. You also again gain a card from the draw. The opponent with a Kagero or Narukami deck would like to retire Supreme Army Eradicator, Zuitan, but is unable to remove him from the field. You maintain your number of resources.

Play these cards with Supreme Army Eradicator, Zuitan in the standard format!

Play these cards with Supreme Army Eradicator, Zuitan in the premium format!