Hyperkin has become of the leaders in clone consoles and associates in the gaming industry. The company is known for its series of the Retron and better versions of controllers from top companies like Nintendo. I purchased Hyperkin’s Retron 1 HD to play my NES cartridges. The NES Classic features thirty games, but I cannot play the original hardware on Nintendo’s miniature console. The Retron 1 HD offers the ability to enjoy NES games on modern TVs in HD.

Hyperkin offers the Retron 1 HD in black and gray. The package includes the console and one controller. I purchased a black version from Amazon. I played most games in my NES collection on the clone console.

The Retron 1 HD is a tiny imitation of the NES. Its design captures the charm of retro games. The structure is inspired by the New-Style NES (NES Top Loader) by Nintendo. The power and reset buttons retain their original design, and both buttons are on the front of the console You insert game carriages from the top. The Retron 1 HD has a firm grip on game cartridges. 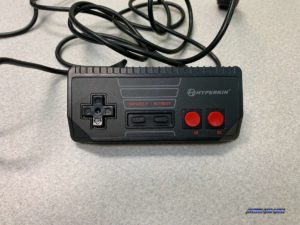 Furthermore, Hyperkin perfectly programmed their Cadet Controller’s response time. The Cadet Controller instantly responds to commands. There is not a delay in the action. You can smoothly play games without any problems. If you want a character to jump, then the character will jump without the worry of a delay.

Unfortunately, the Retron 1 HD only includes one controller. This is a disappointment because many clone consoles include two controllers for two players can play together. You can purchase a Cadet Controller from Hyperkin, and you can also use the original NES controllers on the Retron 1 HD.

The Retron HD presents a sharp picture. The graphics have nearly the same quality as the graphics from the NES. Characters, objects, and backgrounds are sharp with their true shapes. The quality of the graphics remain consistent in 4:3 and 720 HD.

Unfortunately, the Retron 1 HD does not properly replicate the audio from the NES. Sounds and music have a higher pitch than normal. The difference in the audio is very noticeable. You will notice the high pitch when you grab a power-up. The sound effect has a higher pitch.

For example, the coins from Super Mario Bros. do not have the right sound and pitch after you collect them. It is very noticeable. This flaw does not ruin the experience of playing the games on the console.

Finally, a proper clone console needs to be able to play all or the majority of games on a console. It would not be worth our time if a clone console is unable to play many games. The developers at Hyperkin met the mark with the compatibility of their Retron 1 HD. The Retron 1 HD is capable of playing the large library of the NES. I tested a variety of NES games on the Retron 1 HD.

A proper test requires a variety of games to judge the console’s quality. I did not encounter any problems. Every game ran smoothly on the Retron 1 HD. I had the classic experience from a NES on the Retron 1 HD. These are the games that I tested in the list below.

All in all, the Retron 1 HD from Hyperkin provides a modern alternative to play your NES games. I recommend it to players, who want to play the original hardware on modern televisions. The Retron 1 HD has a reasonable price. NES consoles are more difficult to find in 2020, and the Retron 1 HD is an answer for your retro gaming needs.

The Retron 1 HD reminds me of the NES because it has a similar design to the NES and a better version of its controller. I enjoyed playing classic games on the clone console. You can purchase the Retron 1 HD at many online retailers.