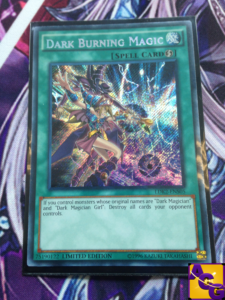 If you control monsters whose original names are “Dark Magician” and “Dark Magician Girl”: Destroy all cards your opponent controls.

Dark Magician is one of the oldest cards in Yu-Gi-Oh! He debuted in Starter Deck Yugi, and has been reprinted many times for over two decades. Dark Magician did not receive a lot of support during his first ten years. He finally became an archetype with the release of Dragons of Legend, and more support was made in the years to follow. Dark Burning Magic is one of those support cards released in Legendary Decks II.

Overall, Dark Burning Magic is the ultimate spell card for Dark Magician and Dark Magician Girl. I recommend playing one copy in a deck. It destroys your opponent’s entire field in an instant! Your opponents will not see this Quick-Play Spell Card coming their way. Play this card at the right moment and you may be able to win the duel with a double Dark Magic attack.